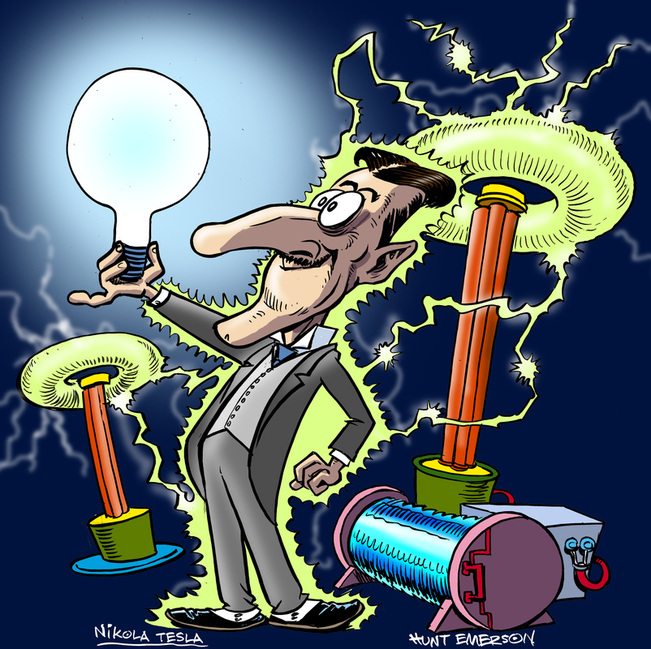 "If you want to understand the Universe,  think of energy, frequency, and vibration."- Nikola Tesla
The great scientist and mystic, Nikola Tesla, was also a cosmic visionary, philosopher,  poet and natural scientist of the highest order, displaying a comprehension of the principles underlying the physical and spiritual structure of our universe, and could be described as a precursor of the modern field of quantum physics.
​Tesla was described in 1931 by a science writer as “an Arch conspirator against the established order of things.”  His prefrontal cortex was the architect of the machinery that runs our modern industrialized world.  His more esoteric theories and inventions where developed in his later years, such as an electric death ray, a thought photograph machine , an apparatus that could read the human aura and his thwarted attempt to supply the world with wireless power using his famous wardenclyffe tower. He even had connections to anti-gravity technology.
Tesla,  like Viktor Schauberger, was a man of altruistic ideals, who sought to harness the unseen powers of the natural world to create a new, non-polluting technology. He spoke of the connections between the small and the great -"The action of even small creatures leads to changes in the universe" and of mankind gearing their machinery to the very wheelwork of nature.
“ He looks not so much at the world as at the universe. He finds power in the waterfall, and at the same time looks forward to a time when we may, perhaps, tap the unseen forces of the planets and use the cosmic energy that swings the stars in their courses.”
- Charles Bernard
His concept of mechanical resonance was also mirrored in his understanding that the cosmos itself is in a symphony of harmonic resonance and vibration  and that space is filled with a kind of unlimited prana or ether-like energy, similar to Wilhelm Reich’s theory of orgone, which could be tapped into at any location.Tesla’s view of this cosmic energy was influenced by the Indian yogi Swami Vivekananda. He wanted Tesla to prove experimentally that reduced matter is nothing more then universal cosmic energy.
​Certainly the most powful ability Tesla had developed throughout his inventive career was his brilliant visualisation and creative thinking skills.  He possessed the ability to visualize a future invention that was so vivid as to mimic reality, so much so, that he did not  need to draw up blueprints.  Forming objects, testing and running them in his mind would have been indistinguishable from the machine in reality,  presumably cutting off most of the sensory input from the world around him while his concentration was engaged in this virtual laboratory. ​
“I do not rush into actual work. When I get a new idea, I start at once building it up in my imagination, and make improvements and operate the device in my mind. When I have gone so far as to embody everything in my invention, every possible improvement I can think of, and when I see no fault anywhere, I put into concrete form the final product of my brain.” - Nikola Tesla
Perhaps Tesla’s mind ie: his virtual laboratory, was a kind of human antenna that was plugged into the unified field of the cosmos, from which he drew his inspiration. 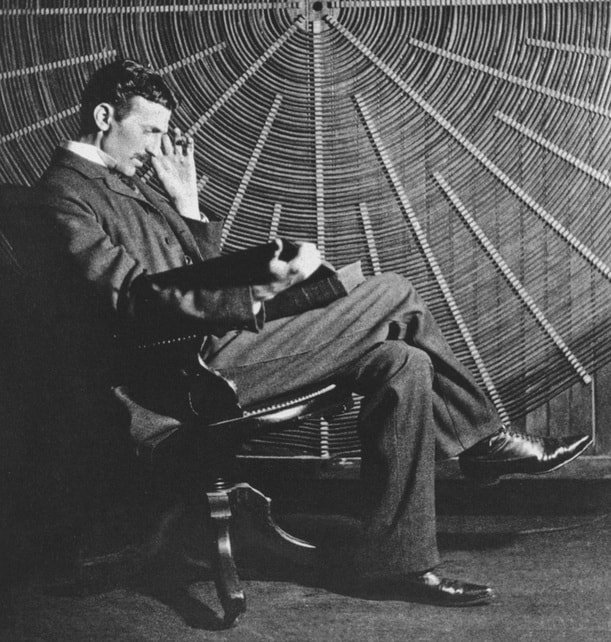 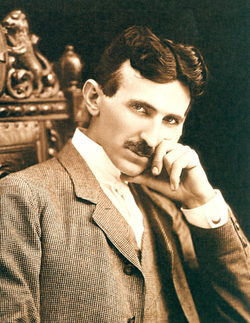 Arguably the greatest electrical engineer in history and one of the greatest minds, has been credited with the alternating  current, the Tesla coil, the first xray, the
first radar, the first  remote controle device, and electrotherapy devices. Aside from these  many astounding "firsts",  Tesla also engaged in many esoteric projects  such as death rays, thought recording machines, wireless transmission of power and something he named, the "Wall of light"   which was  associated with anti-gravity and time manipulation. Tesla was a powerful proponent of "  visualization",  he would create his  amazing inventions in his " minds-eye"   in minute detail before they become manifested in reality. 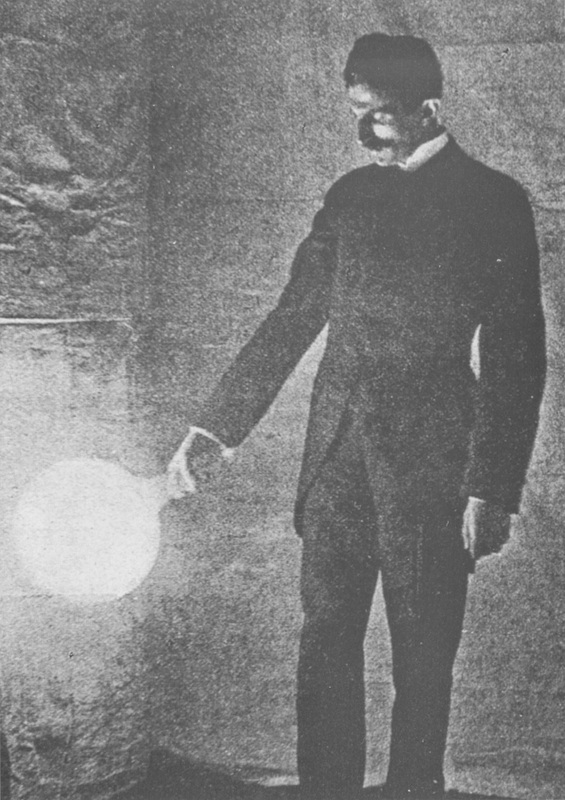 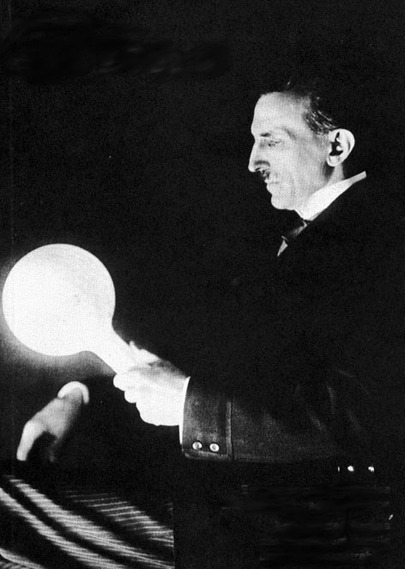 Let the future tell the truth, and evaluate each one according to his work
and accomplishments. The present is theirs; the future, for which I have really worked, is mine. - Nikola Tesla
The above quotation sums up the life of Nikola Tesla, the Serbian-born mechanical engineer and electrical engineer who is acknowledged as one of the greatest inventors the world has ever known. In fact, many of Tesla’s ideas inspired future generations of scientists and inventors.

Although Tesla ended up penniless and his eccentric behavior would dog him later on in his life, he was the most renowned inventor of his time. At the height of his popularity, he was more famous than another great inventor, Thomas Alva Edison, his former employer and, later on, bitter business rival. Tesla’s inventions included alternating current, which laid the foundation for commercial electricity, the Tesla coil, a resonant transformer still widely used today, and the radio, the patent for which the Supreme Court, in a 1947 landmark decision, took away from Guglielmo Marconi and gave to Tesla.
Aside from his commercially successful inventions, Tesla’s brilliant mind also conceived of several others that, when viewed now, can termed as belonging to the realm of science fiction. He worked on such mind-boggling concepts as the long-range wireless transmission of energy
from a laboratory he built in Colorado Springs in 1899. Later on, he would continue his experiments from Wardenclyffe Tower, also known as the Tesla Tower, in Shoreham, Long Island. Among the experiments that Tesla conducted at Colorado Springs was the use of transverse and longitudinal waves in transmitting energy over long distances. Towards this end, he constructed the magnifying transmitter, a version of the Tesla coil designed to generate veryhigh voltages. This transmitter, also known as the Magnifier, was used in Tesla’s experiments on wireless telecommunications and wireless energy transmission.
Tesla proved that wireless transmission of electrical energy is possible when a smaller resonance transformer received energy from a larger, high-voltage transmitter. Later on, this same experiment would help proved that Tesla invented the radio, since this principle is essentially the same as radio transmission, where signals are transmitted wirelessly over the air from a transmitter to a receiver. However, not only do these transmitters signal the beginning of radio, but they would also proved instrumental in technologies such as magnetic resonance imaging that would appear long after Tesla’s death.
Using one of his magnifying transmitters, Tesla alsoattempted to stimulate terrestrial standing waves. He was able to prove that earth resonance modes can be excited through the use of an electric current flowing through the earth. Furthermore, he would claim the existence of an earth resonance frequency of 11.78 Hz. In the 1950s, researchers would validate this finding, although their fundamental earth resonance frequency of 7.3 Hz, alsoknown as the Schumann resonance, was not as high as Tesla first reported.
Tesla would later on continue with his experiments at Wardenclyffe Tower, which wasn’t fully completed due to lack of funding and interest on the part of the public. In Tesla’s mind, the Wardenclyffe facility would have been the first of a chain of large, high-power stations that would circle the globe and allow wireless energy transmission, with minimal or negligible loss.
Although many of Tesla’s theories would eventually beproven to be correct, his dream of wireless energy transmission remains just that - a pipe dream. Will we eventually see the day when energy can betransmitted wirelessly on a global scale? When that time comes, Tesla wouldagain have been proven right. But even if that dream doesn’t materialize, Nikola Tesla remains one of the most brilliant minds our world has ever seen.