Chronicles Of The Jungle​
by Charles Brewer-Carías
Part 1 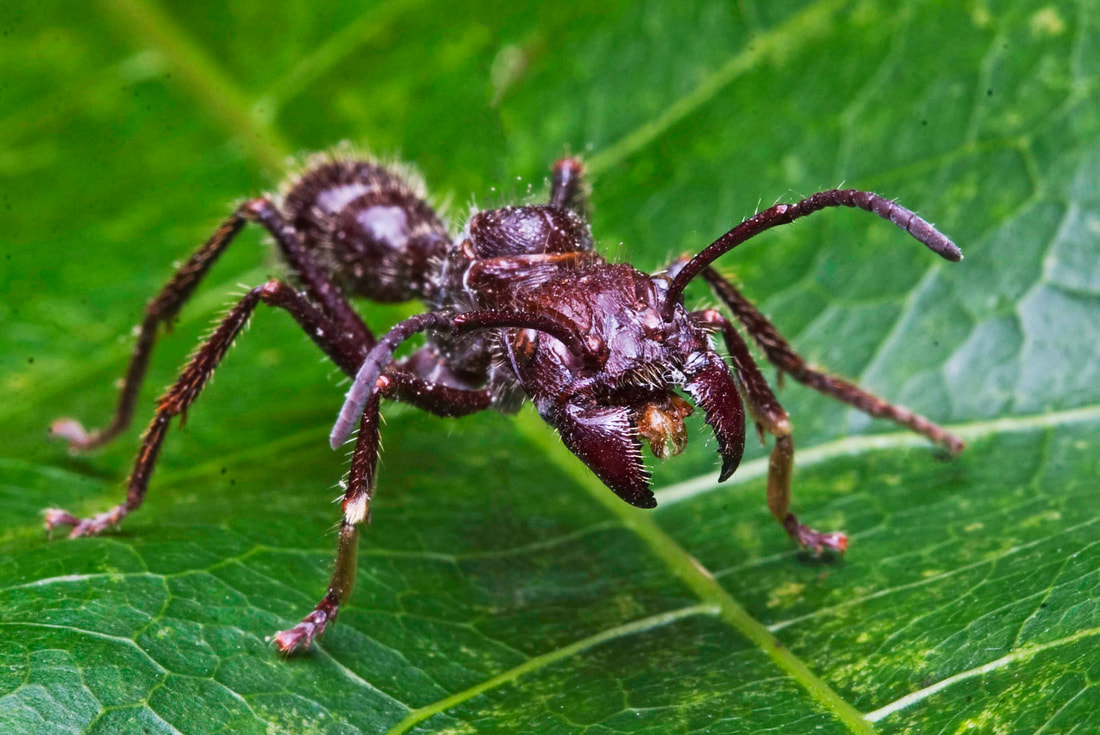 Naturalist, explorer, photographer, and polymath, he is the author of thirteen books on Venezuelan nature and designer of the survival knife "Brewer-Marto", which is used by various armies around the world. Since 1960, Brewer-Carías has dedicated himself to exploring the jungle and thanks to his experience and the knowledge he has gathered from the Yecuana, and Yanomami Indians with whom he has lived; He has prepared a book on Survival Techniques in the Jungle, of which he has promised to deliver a weekly article for HOLIDAY for two years. This is another one of them.
THE ANT TWENTY-FOUR
I had made up my mind not to write about animal topics at once, but after writing about Chiggers, I realized that many people don't know which is the scariest animal in the jungle.

At first it seems difficult to choose which is the most fearsome animal in the jungle. We could say that practically all animals, even the most docile ones, can be considered dangerous, depending on the situation in which one finds them. For example, if a small beetle manages to penetrate into the ear and in its advance through the auditory canal it pierces the eardrum with its front legs; from that moment on we would consider this insect as a very dangerous animal, from which we must beware the next time we go to sleep on the ground.
​It is not necessary to mention the threat posed by poisonous snakes for man and even the risk involved in approaching a tame deer, but the best opinion about what may be the most fearsome animal in the jungle can be given by the indigenous people who have lived there for thousands of years. From them I have learned that if we put aside the tiger and the snakes, which, more than animals, are considered as the reincarnation of evil spirits; All agree that the most feared animal, because it travels unexpectedly alone and the most disproportionately harmful, is the Ant twenty-four. 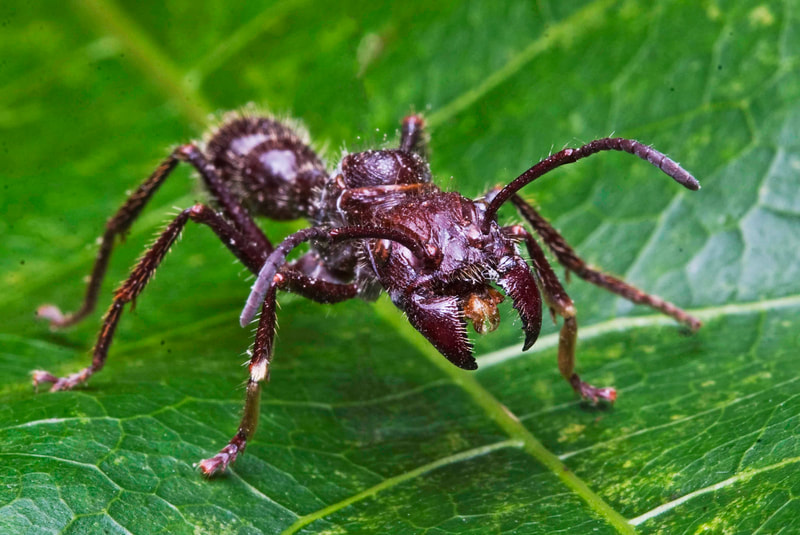 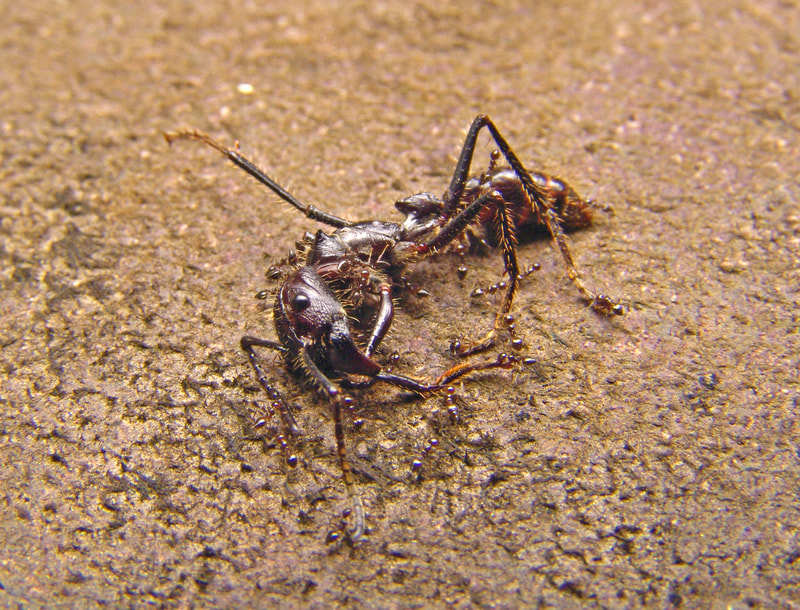 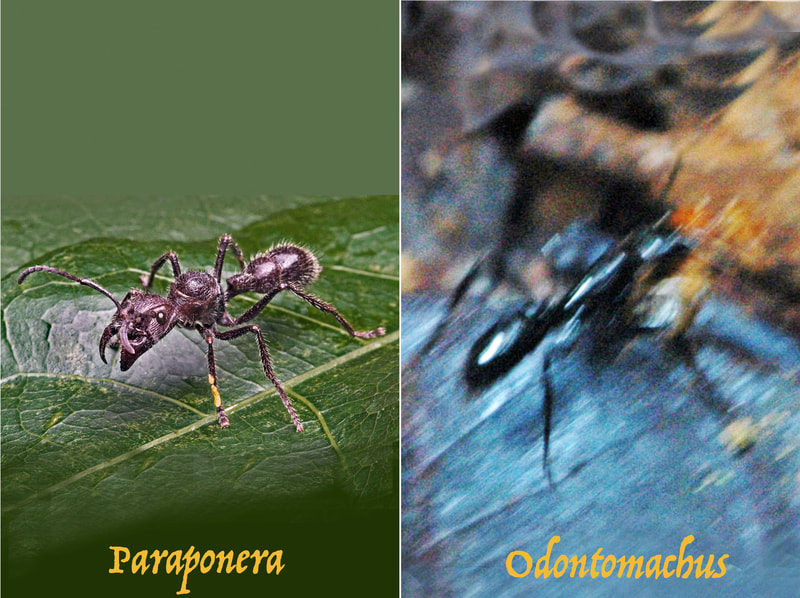 Click on the above photos to enlarge.
The Largest Ant I Have Ever Seen 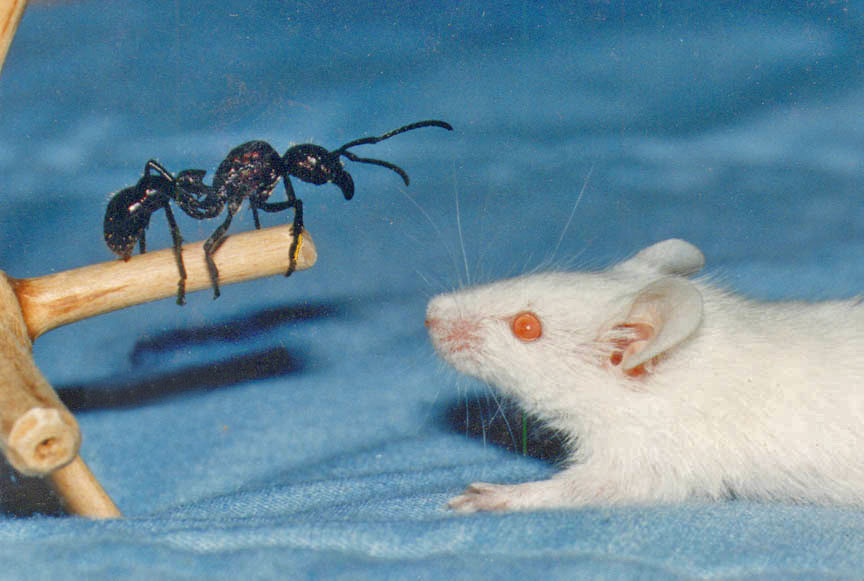 ​I felt a very bad pain in the ball of my ring finger, as if it had been pinched with pliers. I realized that it was not caused by the jaws of the ant I grabbed, because it had been in sight all the time, and also because the pressure I felt continued after I had already shaken it off.
It was June 6, 1961 and still today sixty years later, I remember everything clearly. Perhaps for the same reason why the young Ye'kwana  sailors never forget the landscape and the words that precede the painful experience they have to undergo when reaching the mouth of each new tributary river that is unknown to them. Then, to learn of its existence, an adult is in charge of initiating them in the art of navigation, spilling a caustic eye drop on the eyes of the initiate from the tuber of a plant of the ginger family. From that moment and for a lifetime, this new sailor will share the geographical memory of his ancestors, remembering forever the name and taste of the river water they have visited.
We were stopped in one of the hundreds of streams that break the course of the Erebato river, unloading what we transported in the curiaras,{ big dugout canoes } in order to drag and push these heavy boats carved from a single laurel trunk, which although they were empty, they weigh over a ton and were very difficult to move over the stones. It was noon and we were resting near a rock that was bristling with the dry stems of those strange flowering plants of the Podostemataceae family, which resemble algae, spend most of the year underwater, clinging tenaciously to the places where there is the greatest turbulence, but in the dry season they just come out into the air and bloom; when the river dries up and leaves them exposed to the sun above  the stones. There, near the fritters, wandering among those dehydrated plants, there was a large caramel-brown ant, somewhat hairy and with two spots of yellow hair that covered part of its front legs. It was the largest ant I had ever seen.
I knew the large "bachacos culones" (big ass ants)of the genus Atta sp., Which are used to be eaten fried and fly when the first rains fall, and I had also seen other large ants, black in color, smooth and shiny like bullets, that walk nervously and busy on sandstone savannas; But this jungle animal was a larger species of ant and could see me from a distance. This insect had a keen vision and
was able to follow with his body the movements that I made with my hand! and until that moment, I had never noticed this vision ability in other ants, who generally just go about their business, without worrying about what is happening in the surroundings. I had learned this behavioral experience when I was about four years old and together with my brothers Allan and Tony, we used to sweep with our salivated finger and eat with impunity the long lines of ants that were returning to their nest, which they had made in a little hole. from the floor of the terrace of the house where we lived in Caracas. The recurrence of those threatening jaws caught my attention and I estimated that if I let them bite me, they could easily cut the skin on my finger; so to handle it more safely, I reached for a dry leaf to serve as a glove. When I was finally able to pin her against the surface of the stone; I felt that the prothorax was unexpectedly solid, and for a moment it reminded me of the strength of lead ammunition, the size of those used to hunt deer.
The Amnesia Of Pain
I clearly remember that the last thing I perceived on that island of rocks in the middle of the river was a pulsating screech, hardly distinguishable against the background noise of the stream; so at times it seemed to me to confuse it with the sound that could come from a small cicada, standing on some distant tree. Contorting under the shadow of my fingers, I discovered that that inimitable sharp sound was generated by the ant, thanks to the friction that was produced between the rings of its abdomen. It used the same procedure to emit noise that I already knew from the large beetles of the Golofa genus that are in Cerro Avila in Caracas, and that precisely come out to mate during this same month of June when I was traveling with the Ye´kwana indians on that expedition through the largest tributary of the Caura river.
An instant later, all other sensations and even the memory of what surrounded me for the next hour, would have disappeared forever. It was not like the pain of scorpion stings or wasps; that feels cold and slippery like a glass splinter and then fades in minutes. No, this pain stayed the same. Desperately the same, and I found nothing to calm it down. Not the heat of matches, not cold water, not sucking on the finger, not pressure. Men don't cry, I thought, and the pain made me want to laugh loudly. Later I realized that I had been crying, but in a different way. Before I even knew that this was a "Veinticuatro", (The Twenty four hour ant), I learned that I had been stung
by a "YAK´" as the Yecuana Indians call it.
I don't know why it caused me so much anxiety, looking for some mark that would indicate the entry point of that sting that I had never anticipated; as if it were going to bring me some relief. This was a pain that I hadn't experienced before, which crept up my arm until it set in a knot under my armpit and almost paralyzing the arm.. 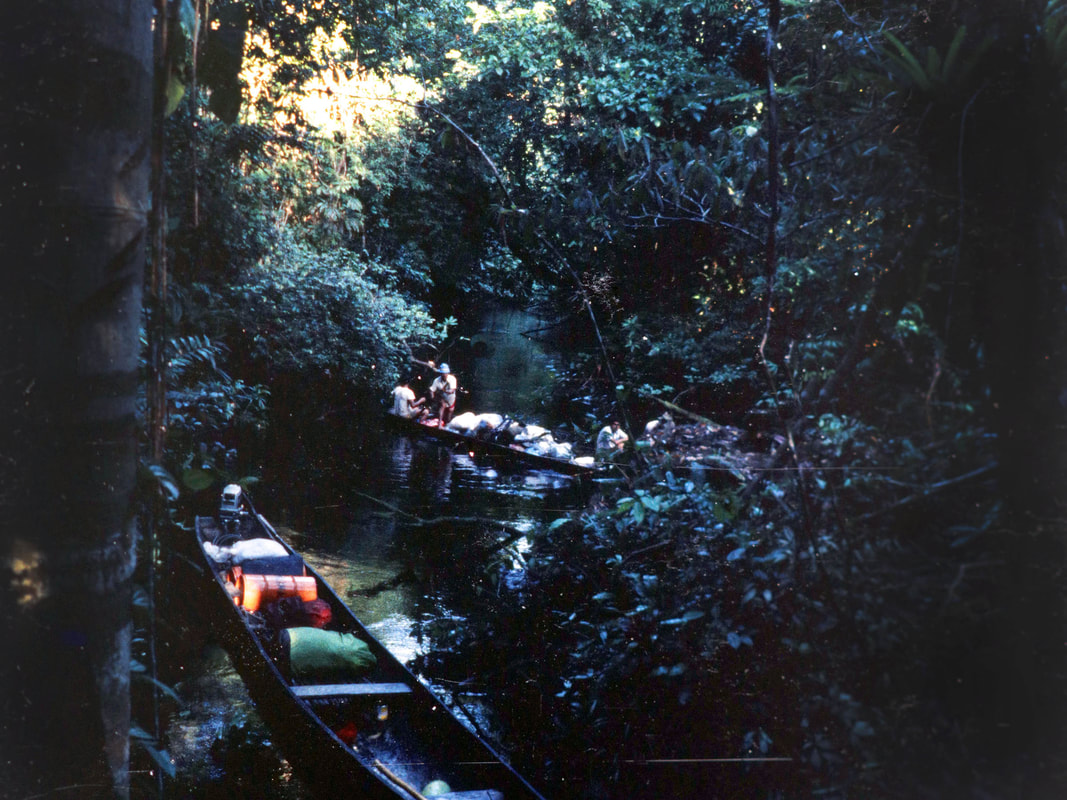 " The above photo of the dugout canoes amidst the jungle shows how easy a swimming drifting Bullet ant could climb up  into the boat and you would not notice it..." - Charles Brewer Carias 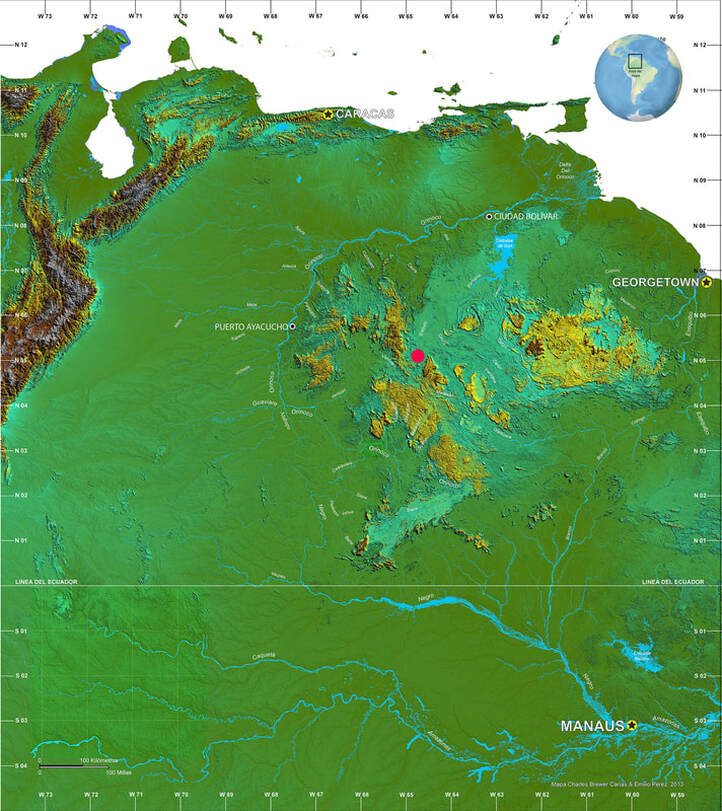 The red dot on the map above shows the place on the Erebato river mentioned in the article. 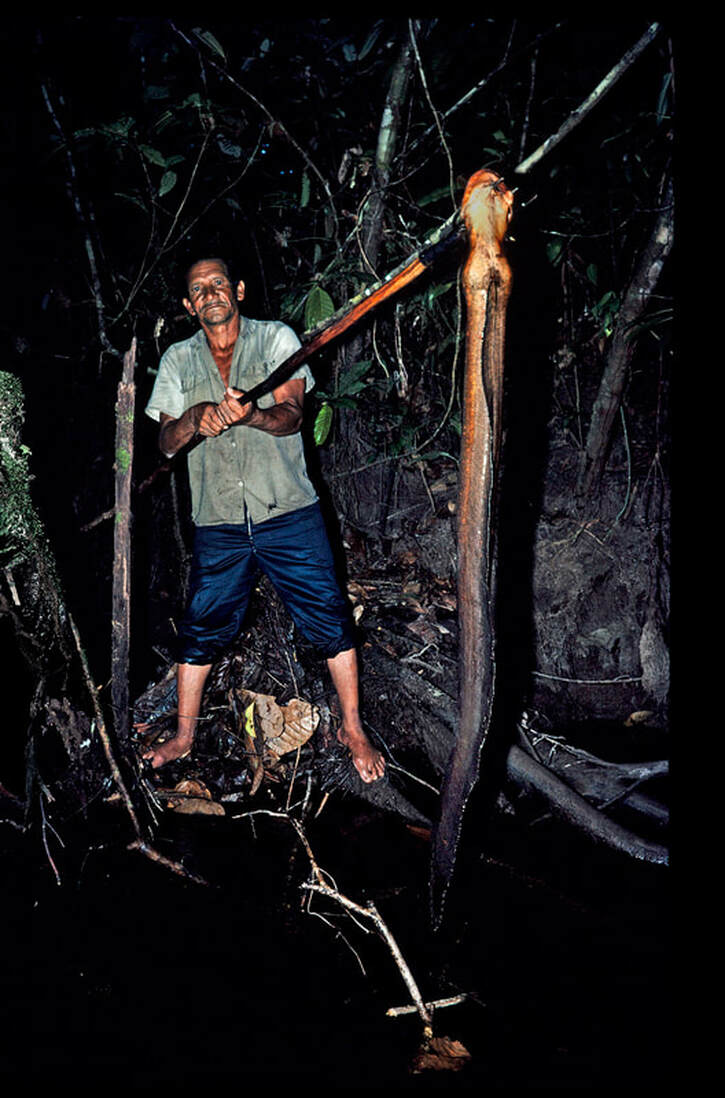 "Above photo shows the electric eel “Temblador”. this means: “Shaker” or shakerer, the one that delivers shakes... !"- Charles Brewer Carias

The above picture shows Charles with the blowgun or Cerbatana and is from when he lived among the Ye´kwana indians in 1961. - Photo by FANNY BREWER 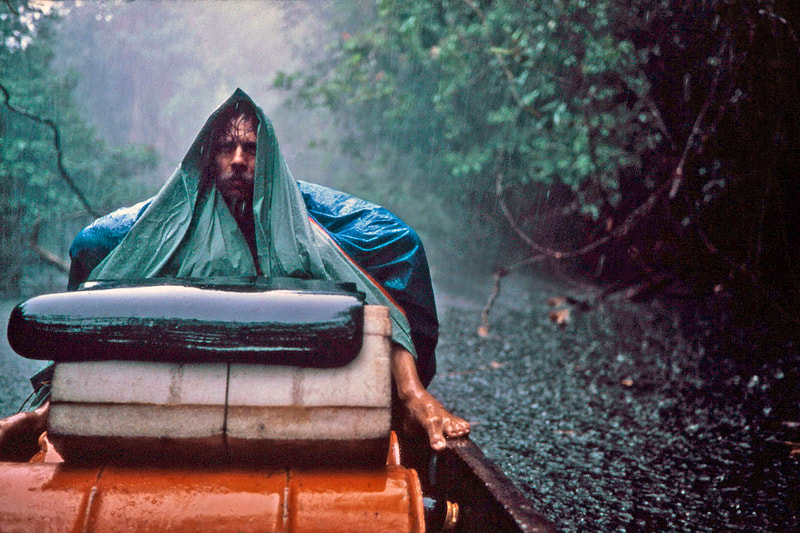 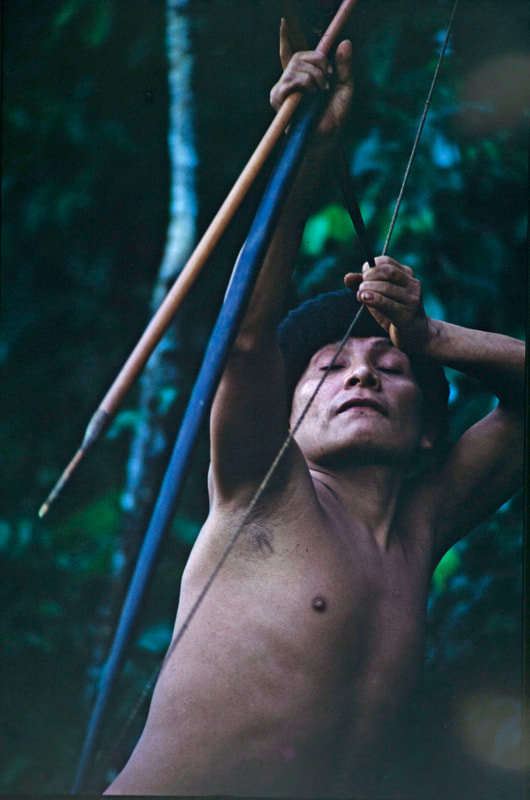 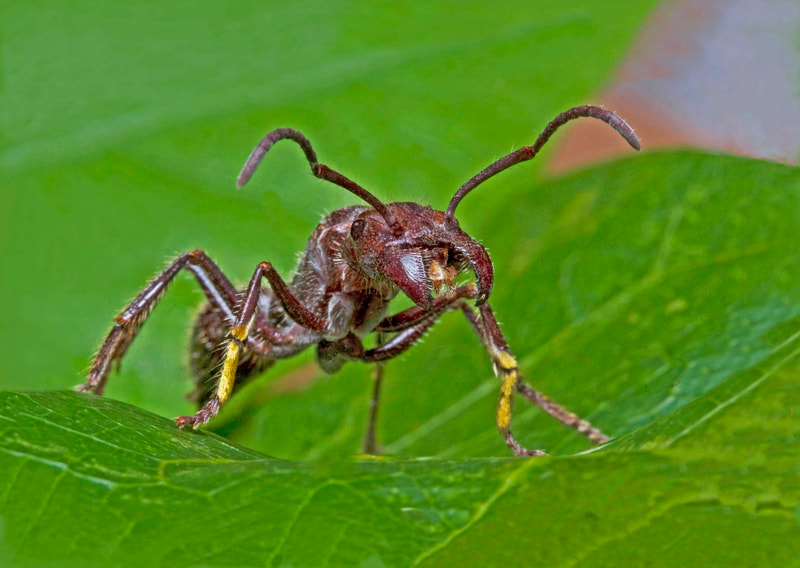 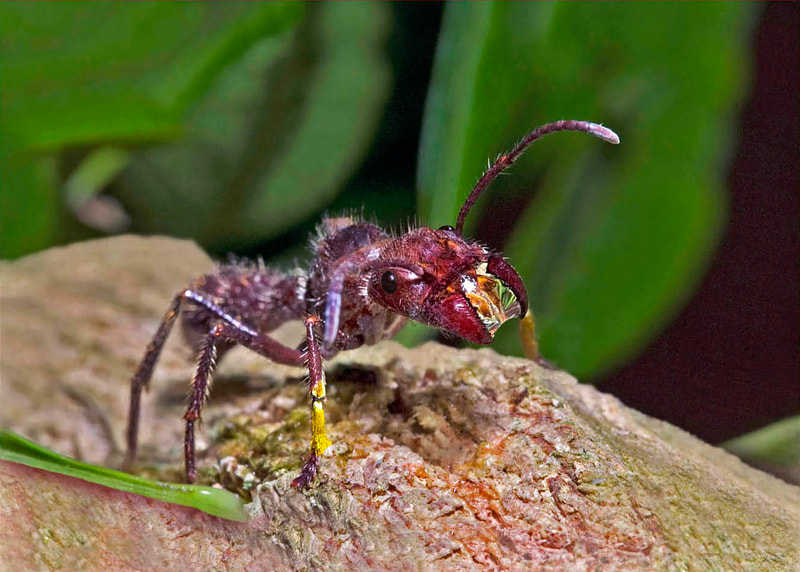 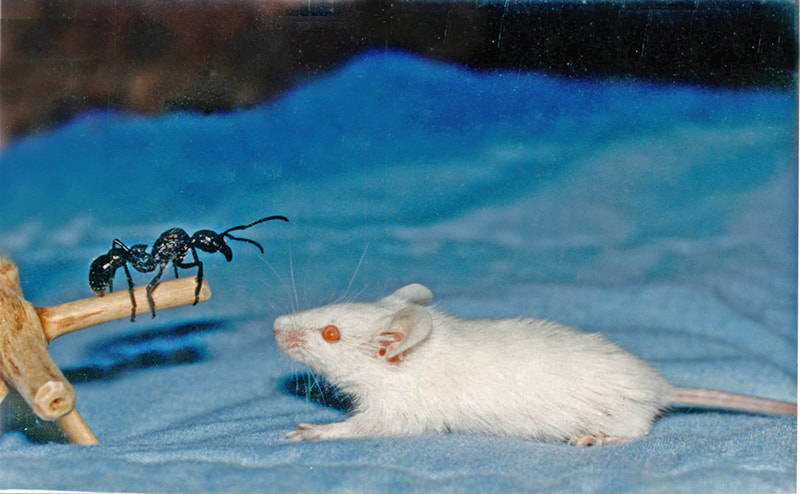 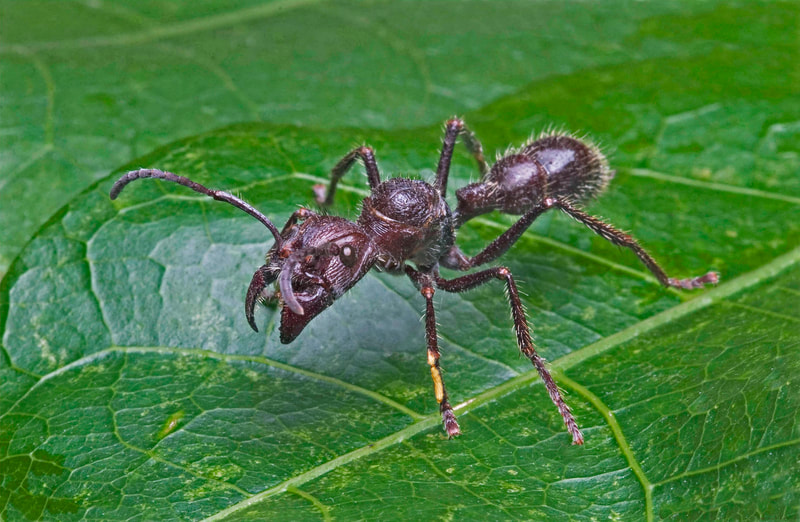 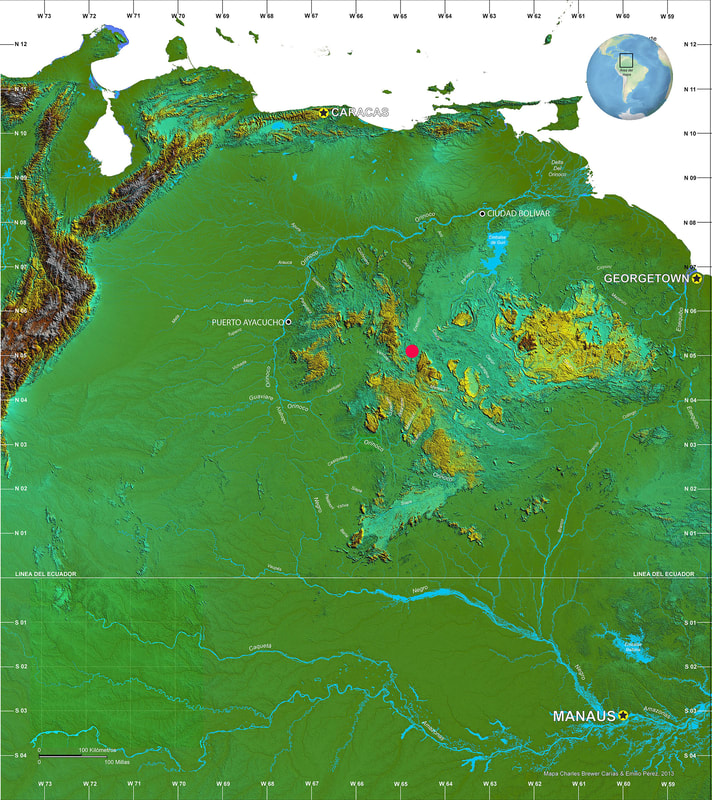 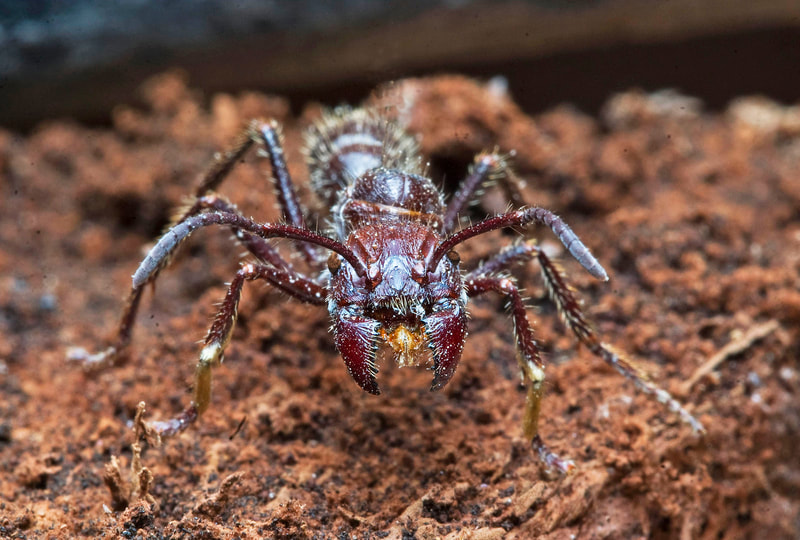 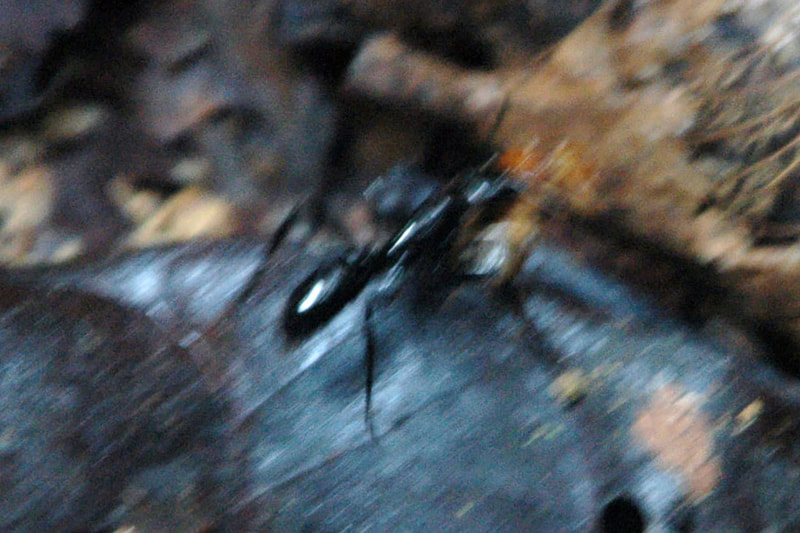 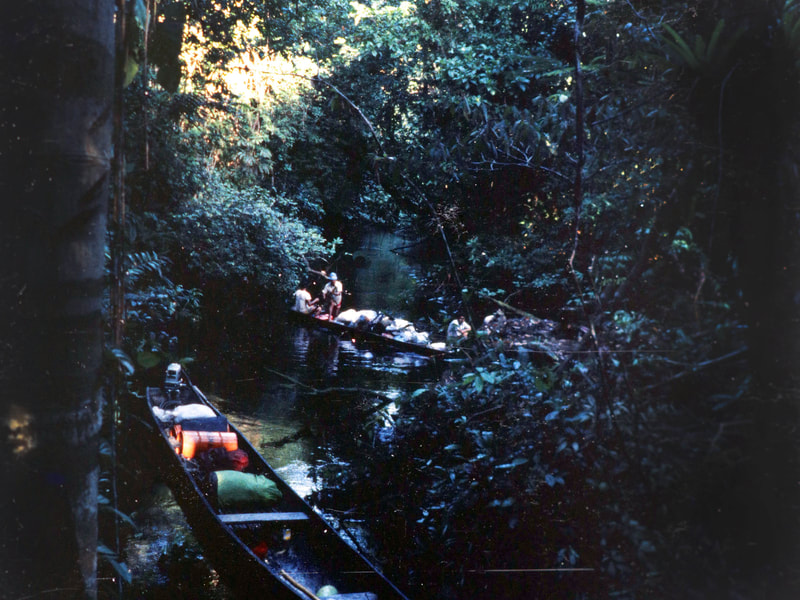 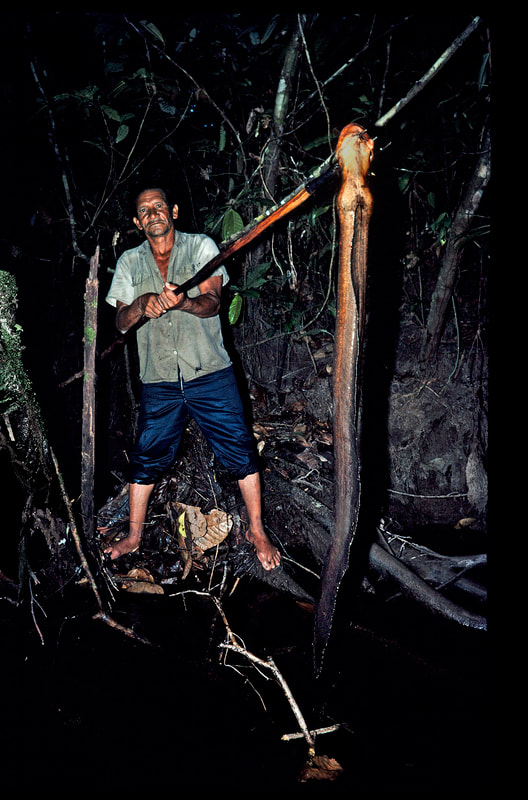