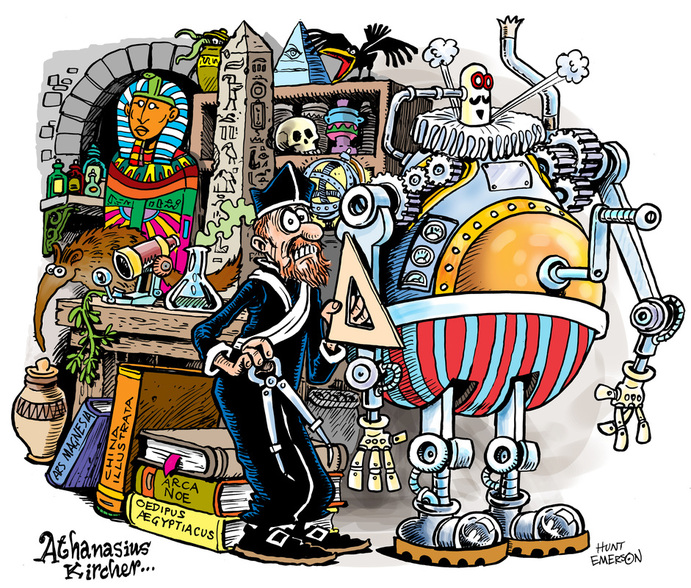 ﻿﻿“ Nothing is more beautiful than to know all.”﻿ - Athanasius Kircher﻿﻿
The Ultimate Mad Professor
Perhaps one of the most odd and extrordinary polymaths, was the great 17th century thinker and tinkerer, German Jesuit Athanasius Kircher, a priest-scientist and the ultimate mad professor of the Renaissance era. Kircher was an ingenious man from a bygone age, who believed in mermaids, giants, dragons and was described as a "Master of a Hundred Arts". He was also considered to be the last real “Renaissance” man. Kircher’s century, much like the Victorian era, was certainly an “age of wonders” as far as scientific investigation goes, presenting an almost inexhaustible range of phenomena, for those with a scientific bent such as Athanasius Kircher.

Athanasius Kircher was caricatured in Umberto Eco's brilliant novel "The Island of the Day Before" as Father Caspar Wanderdrossel, a mad old Jesuit polymath . The story is set against a backdrop of Baroque-era science, metaphysics, and cosmology
﻿ Baroque Polymath﻿

During his lifetime, the 17th century Jesuit priest and scholar, was known for his vast range of interests as well as his proficiency in many different fields of study. Though the German priest-scientist published nearly forty major papers before his death in the late 1600’s, his most notable contributions revolved around medicine, geology, and cultural studies (particularly Egyptology and Sinology). Kircher was also an avid researcher and collector of archaeological relics. He eventually established a museum that showcased his finds while he was at the Collegio Romana. Called the Museum Kircherianum in Kircher’s native German tongue, the museum was the first of its kind, pioneering the practice of putting both archaeological finds and groundbreaking scientific discoveries and inventions on display for the benefit of the public. The now famous illustration of the frontispiece to Kircher’s science museum depicts the establishment as cavernous, with the black-robed Kircher and two visitors illustrated as mere miniscule figures gazing up at the tall, sweeping arches of the museum’s entrance.There were also obelisk models that were built to scale and scattered throughout the exhibit (as homage to Kircher’s fascination with Egyptology perhaps), as well as a counting machine that could solve geometrical problems, and a highly popular and fascinating contraption that was only described as a set of glass spheres that illustrated how the planets moved around the sun. And since Kircher was also fascinated by the world of minutiae and the study of malaria, he made it a point to include slides of tiny organisms or germs that turned diseases into epidemics. Visitors could view these minute particles up close by using Kircher’s 17th-century version of the microscope.

Science-centered as most of the items on display were, Kircher’s veritable cabinet of curiosities also featured artifacts that sought to evoke an acknowledgment and appreciation for the Divine. Apart from the slides that featured microscopic germs, there were also samples of the minutiae responsible for sea phosphorescence, a phenomenon that gives waves an eerie glow at night and thus was thought to be evidence of the presence of a greater power in the world. Even the Egyptian obelisks themselves were utilized by Kircher as a symbol for the existence of essentially Christian thoughts and concepts in the ancient world.Arriving visitors eager to see the museum were often surprised by Kircher’s voice announcing their arrival through a “long bass-trumpet embedded in the wall,” a very basic intercom speaker or megaphone invented by the Jesuit priest so he could address visitors from his study above the museum.True to form, the objects on display at Kircher’s museum were a mixed bag. There were various stuffed and preserved animals, as well as their distinctive parts (e.g., horns, tusks, or skeletons), along with a wide collection of rocks and minerals. Kircher’s displays also included a few fanciful elements, which ranged from the merely pretty (animal fossils encased in amber) to the dubious (a dried-up mermaid’s tail and the alleged bones of a giant). Casual visitors to Kircher’s museum compared it to a typical cabinet of curiosities, which was a term used to describe a vast collection of artifacts that the Renaissance world did not have categories for.The many machines of wonder that he built were also on display.

Kircher’s museum survived for about three centuries until it was put to rest, with its contents distributed equally among three prominent museums in the Italian capital.


“All of nature in its awful vastness and incomprehensible complexity is in the end interrelated - worlds within worlds within worlds: the seen and the unseen - the physical and the immaterial are all connected - each exerting influence on the next - bound, as it were, by chains of analogy - magnetic chains. Every decision, every action mirrors, ripples, reflects and echoes throughout the whole of creation. The world is indeed bound with secret knots." 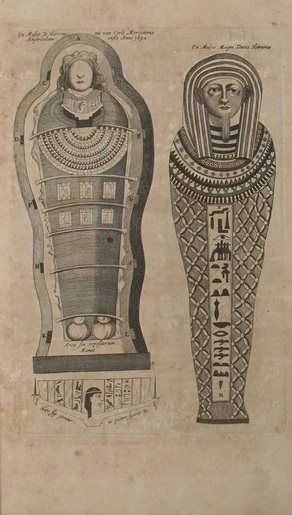 Kircher’s field of studies was indeed vast and covered everything from ancient Egyptian hieroglyphics to sunflower clocks, 17th century robot hacking, taxidermy and machines that mirrored the celestial motions of the planets or Orrrys, which have always been a favourite with old world scientists and were often used as a teaching aid for both 17th and 18th century lectures on natural philosophy. All this eclectic and intense study contributed to his growing body of encyclopaedic knowledge about life and the universe. His list of accomplishments are so amazing that they seem implausibale. He published around 40 major scientific books written in Latin, including two enormous encylopedius - one called “Oedipus Aegyptiacus”, was a massive study on ancient Egyptian civilisation and the other was about China.

Kircher is also often credited as being the father of Egyptology. He was a avid inventor, building many unusual devices in order to test his scientific thearies, including magnetic clocks, robotic automata, aeolian harp, hydraulic machines, a two-headed imperial eagle that vomitted water, a large number of mechanical clocks, celestial and terrestrial globes,the Delphic Oracle, or speaking statue, a prototype of the magic lantern and many, many more.
Kircher also pioneered the use of the microscope.

Of great interest are the aesthetic qualities of his books with their fabulous and stunning old world engravings, depicting every phenomena that Kircher thought worthy of investigation, which was just about everything! The images offer a feast of curiosities from his mechanical wonders to biblical events such as research on the Ark of Noah , architecture, mermaids and many studies of natural history.

The magnificent illustrations also offer a window into the mind of Kircher himself, as they reflect his many extraordinary postulations on the nature of the cosmos, so that he might aspire to understand the nature of God through his creations. His never-ending spirit of inquiry, much of it in the style of Leonardo Da Vinci, was a hallmark of the Renaissance mind, which is sadly lacking in today's world of scientific boxed - in specialism. After studying Kircher’s endless scientific inquiry and inventive spirit it leaves one feeling inspired to get out your own notebook, magnifying glass and Renaissance insight and undertake some Nobel discoveries or ingenious pursuit.

It was said that Kircher could think only in images. If that was so, then his mind must have been a universe of endless wonder as his copious encyclopaedic volumes show.
It’s little wonder, then, that even though the Museum Kircherianum no longer exists today, there is now a rapidly-growing newfound curiosity about it's founder as well as a movement to preserve his memory and his accomplishments. He undoubtedly deserved the title “Master of a Hundred Arts”! Athanasius Kircher truly lived a life less ordinary.

“ Sub specie aeternitatis - Latin 'under the aspect of eternity” 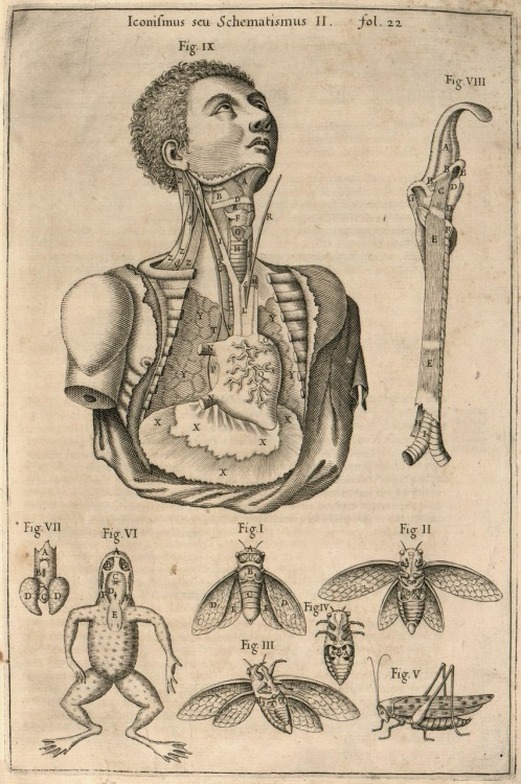 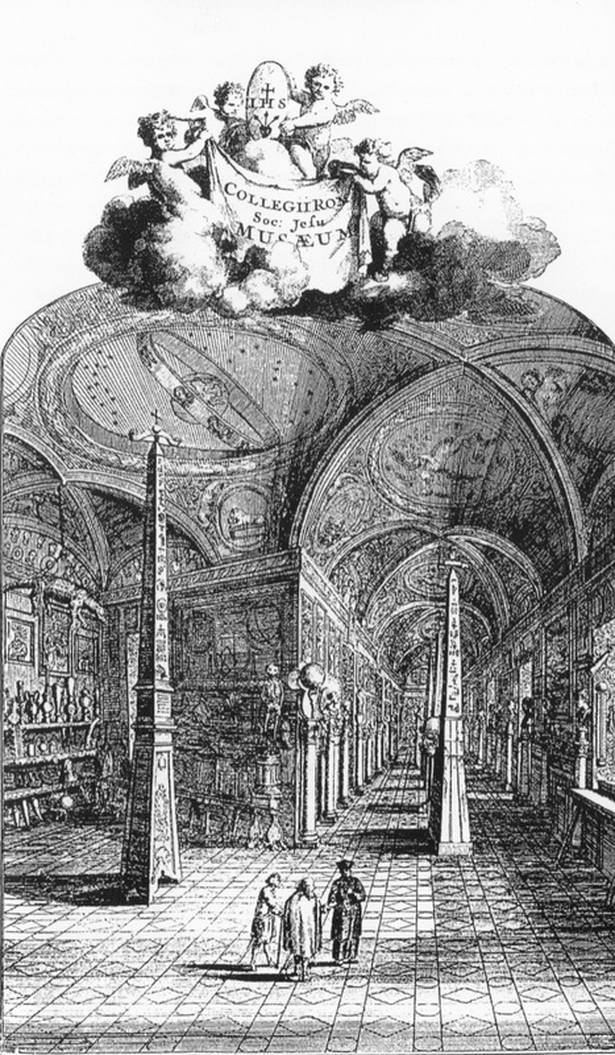 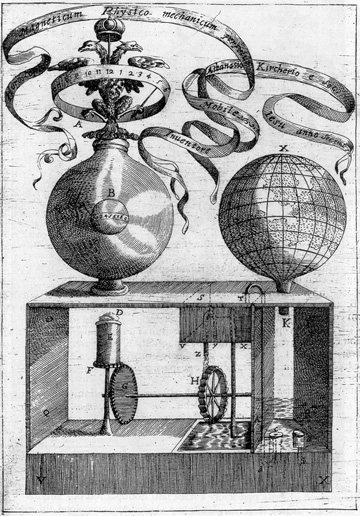 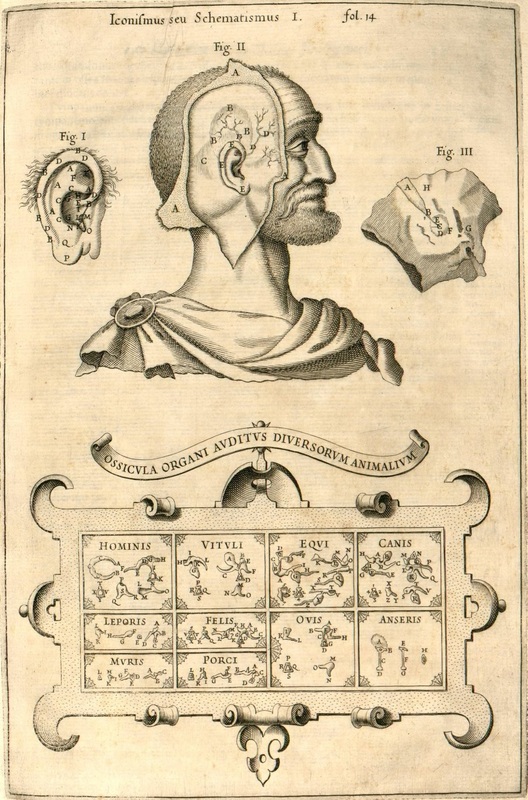 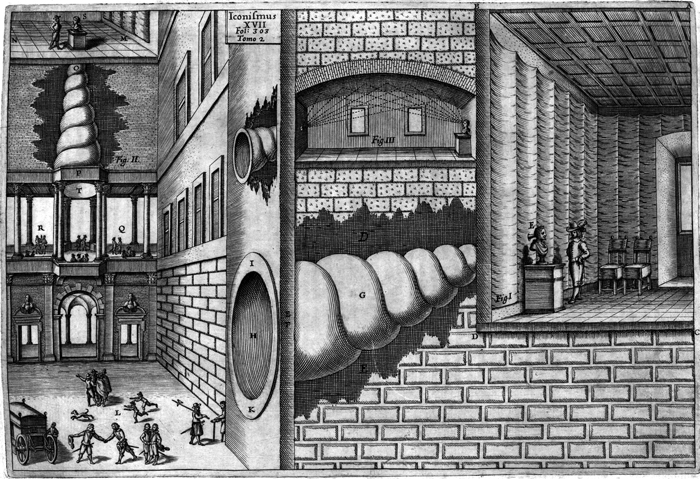